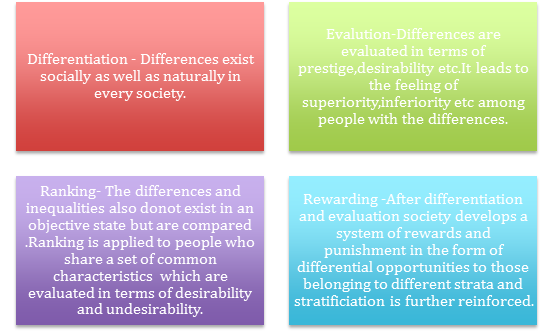 Sociologists generally distinguish four main types of social stratification - slavery, estate, caste and social class and status. In industrial societies there are both status groups and social classes. Ogburn and Nimkoff define social stratification as the process by which individuals and groups are ranked in a more or less enduring hierarchy of status. Stratification divides a society into higher and lowers social units. Sorokin asserts that there can be no society without stratification. It is a kind of social differentiation. Social differences become social stratification when the concerned people are ranked hierarchically on the bias of the inequality like differences on some dimensions such as income, power, age, occupation and race etc. A stratified society is marked by inequality by differences among people that are evaluated by them as being higher or lower or equal. In every society some men are regarded as superior or inferior as for example patricians and plebians or aristocrats and commoners. Some are rich and power. In every society there are ruling class and ruled class or subjects. These constitute the substance of social stratification. Stratification involves unequal distribution of rights and privileges among the members of a society. This is described by Gisbert as division of society into permanent groups on categories linked with each other by the relationship of superiority and subordination. Society attaches different rights and rewards to different positions. Some are rated higher than the others in terms of rights and privileges. According to Spengler stratification results from scarcity of privileges and powers that is created by differentiation of powers, rights and rewards. Kingsley Davis emphasizes the functional necessity of stratification. Differentiation of rewards produces social inequality. According to Davis social inequality ensures that the most important positions are filled by the best fitted persons. Hence social inequality is necessary in any society.

Social Stratification based on Economy

Economic strata have existed in almost every society .In his materialistic philosophy Karl Marx has given enormous importance in the economic analysis of strata but in the place of strata he refers the term class. These economic classes according to Marx are the actual representatives of social stratification. Emile Durkheim and Ferdinand Tonnies also discussed economic strata in their interpretation of Gesellschaft and organic solidarity. Class thus is one of the most important base for social stratification but according to Karl Mannheim stratification is not only based on economic condition but it is also related with non-economic factors.

Social Stratification based on Politics