Caste is closely connected with the Hindu philosophy and religion, custom and tradition .It is believed to have had a divine origin and sanction. It is deeply rooted social institution in India. There are more than 2800 castes and sub-castes with all their peculiarities. The term caste is derived from the Spanish word caste-meaning breed or lineage. The word caste also signifies race or kind. The Sanskrit word for caste is Varna that means color.

The caste stratification of the Indian society had its origin in the chaturvarna system. According to this doctrine the Hindu society was divided into four main varnas - Brahmins, Kshatriyas, Vaishyas and Shudras. The Varna system prevalent during the Vedic period was mainly based on division of labor and occupation. Earlier there were only three varnas, the Shudras were added later and occupational division was not rigid. A fifth group that falls outside the Varna system and is called Avarna or outcaste or untouchable also exists. Caste is an endogamous group having a relatively independent culture and structural existence. The caste system owns its origin to the Varna system.

Ghurye says any attempt to define caste is bound to fail because of the complexity of the phenomenon. According to Risley caste is a collection of families bearing a common name claiming a common descent from a mythical ancestor professing to follow the same hereditary calling and regarded by those who are competent to give an opinion as forming a single homogeneous community. 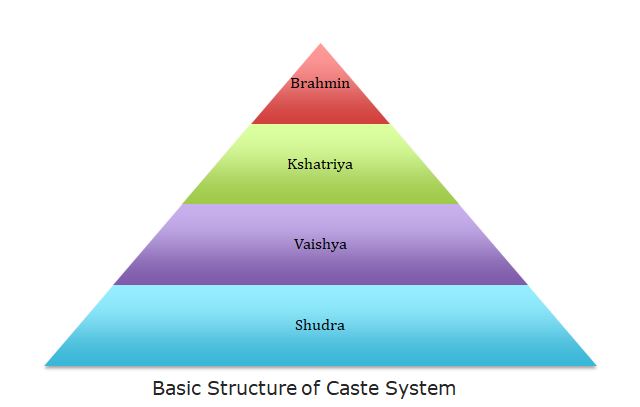 According to Maclver and Page when status is wholly predetermined so that men are born to their lot without any hope of changing it, then the class takes the extreme form of caste. Cooley says that when a class is somewhat strictly hereditary we may call it caste.

M.N Srinivas sees caste as a segmentary system. Every caste for him divided into sub castes which are the units of endogamy whose members follow a common occupation, social and ritual life and common culture and whose members are governed by the same authoritative body viz the panchayat.

According to Bailey caste groups are united into a system through two principles of segregation and hierarchy. For Dumont caste is not a form of stratification but as a special form of inequality. The major attributes of caste are the hierarchy, the separation and the division of labor. Weber sees caste as the enhancement and transformation of social distance into religious or strictly a magical principle. For Adrian Mayer caste hierarchy is not just determined by economic and political factors although these are important. Nesfield gave a theory of caste based on occupation. Caste is also viewed from two broad perspectives: