The industrial societies are different from any previous type of social order, and their development has had consequences stretching far beyond their European origin. Industrialization originated in the eighteenth century England as a result of the industrial revolution, complex set of technological changes affecting the means by which people gained their livelihood. There changes included the invention of new machines, the harnessing power resources to production, and the use of science to improve production methods. The relatively low level of technological development did not promote more than a small minority to be freed from the chores of agricultural production. A prime feature of industrial societies today is that the large majority of the employed population work in factories, offices or shops rather than in agriculture. Over 90% of people live in towns and cities, where most jobs are to be found and new job opportunities are created. The largest cities are vastly greater in size than the urban settlements found in traditional civilizations. In the cities, social life becomes more impersonal and anonymous. The Political systems are more developed and intensive than forms of government in traditional studies.


The industrial societies were the first nation- states to come into existence. Nation-states are political communities, divided from each other by clearly delimited boarders rather than the vague frontiers areas that used to separate traditional states. Nation state governments have extensive powers over many aspects of citizen’s lives, framing laws that apply to all those living within their boarders Scientific discoveries and technical advancements led to many changes in the social structure. Industrial society is an outcome of these scientific forces, advancement of human thought and change in the views of humanity. Industrial revolution heralded evolution of industrial society. 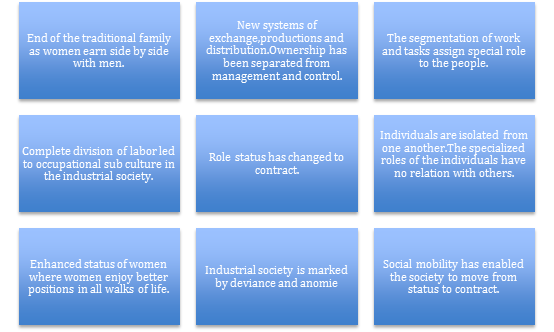