Impact of Technology Change on Society

Science and technology are essential ingredients of modern life. They transcend local boundaries and touches lives of everyone. Evolution of mankind can be seen in terms of technological evolution as well. Invention of fire and wheel changed the face of mankind. Various historical epochs - hunter-gatherers, agrarian society and industrialist society are distinguished from each other in term of technological advancement.

The technological factors represent the conditions created by men that have a profound influence on his life. Technology is product of civilization. According to Karl Marx even the formation of social relations and mental conceptions and attitudes are dependent upon technology.

Veblen has regarded technology as the sole explanation of social change.W.F Ogburn says technology changes society by changing our environments to which we in turn adapt. This change is usually in the material environment and the adjustment that we make with these changes often modifies customs and social institutions. 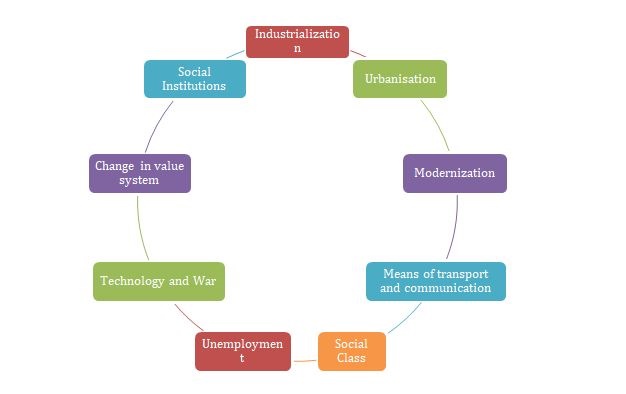 Technology has contributed to the growth of industries or to the process of industrialization. Industrialization is a term covering in general terms the growth in a society hitherto mainly agrarian of modern industry with all its circumstances and problems, economic and social.

It describes in general term the growth of a society in which a major role is played by manufacturing industry. The Industrial Revolution of 18th century led to the unprecedented growth of industries. Industrialization is associated with the factory system of production. The family has lost its economic importance. The factories have brought down the prices of commodities, improved their quality and maximized their output. The whole process of production is mechanized. Consequently the traditional skills have declined and good number of artisans has lost their work. Huge factories could provide employment opportunities to thousands of people. Hence men have become workers in a very large number. The process of industrialization has affected the nature, character and the growth of economy. It has contributed to the growth of cities or to the process of urbanization.

In many countries the growth of industries has contributed to the growth of cities. Urbanization denotes a diffusion of the influence of urban centers to a rural hinterland. Urbanization can be described as a process of becoming urban moving to cities changing from agriculture to other pursuits common to cities and corresponding change of behavior patterns. Hence only when a large proportion of inhabitants in an area come to cities urbanization is said to occur. Urbanization has become a world phenomenon today. An unprecedented growth has taken place not only in the number of great cities but also in their size. As a result of industrialization people have started moving towards the industrial areas in search of employment. Due to this the industrial areas developed into towns and cities.

Modernization is a process that indicates the adoption of the modern ways of life and values. It refers to an attempt on the part of the people particularly those who are custom-bound to adapt themselves to the present-time, conditions, needs, styles and ways in general. It indicates a change in people's food habits, dress habits, speaking styles, tastes, choices, preferences, ideas, values, recreational activities and so on. People in the process of getting modernized give more importance to science and technology. The scientific and technological inventions have modernized societies in various countries. They have brought about remarkable changes in the whole system of social relationship and installed new ideologies in the place of traditional ones.


Development of the means of transport and communication:

Development of transport and communication has led to the national and international trade on a large scale. The road transport, the train service, the ships and the airplanes have eased the movement of men and material goods. Post and telegraph, radio and television, newspapers and magazines, telephone and wireless and the like have developed a great deal. The space research and the launching of the satellites for communication purposes have further added to these developments. They have helped the people belonging to different corners of the nation or the world to have regular contacts.


Transformation in the economy and the evolution of the new social classes:

The introduction of the factory system of production has turned the agricultural economy into industrial economy. The industrial or the capitalist economy has divided the social organization into two predominant classes-the capitalist class and the working class. These two classes are always at conflict due to mutually opposite interest. In the course of time an intermediary class called the middle class has evolved.

The problem of unemployment is a concomitant feature of the rapid technological advancement. Machines not only provide employment opportunities for men but they also take away the jobs of men through labor saving devices. This results in technological unemployment.

The dangerous effect of technology is evident through the modern mode of warfare. The weaponry has brought fears and anxieties to the mankind. They can easily destroy the entire human race reveal how technology could be misused. Thus greater the technological advancement the more risk for the mankind.

Technology has profoundly altered our modes of life. Technology has not spared the social institutions of its effects. The institutions of family, religion, morality, marriage, state, property have been altered. Modern technology in taking away industry from the household has radically changed the family organization. Many functions of the family have been taken away by other agencies. Marriage is losing its sanctity. It is treated as a civil contract than a sacred bond. Marriages are becoming more and more unstable. Instances of divorce, desertion and separation are increasing. Technology has elevated the status of women but it has also contributed to the stresses and strains in the relations between men and women at home. Religion is losing hold over the members. People are becoming more secular, rational and scientific but less religious in their outlook. Inventions and discoveries in science have shaken the foundations of religion. The function of the state or the field of state activity has been widened. Modern technology has made the states to perform such functions as -the protection of the aged, the weaker section and the minorities making provision for education, health care etc. Transportation and communication inventions are leading to a shift of functions from local government to the central government of the whole state. The modern inventions have also strengthened nationalism. The modern governments that rule through the bureaucracy have further impersonalized the human relations. The most striking change in modern times is the change in economic organization. Industry has been taken away from the household and new type of economic organizations have been set up such as factories, stores, banks, corporations etc.