It has been generally assumed that the institution of marriage is a universal feature in human societies. Although many sociologists and anthropologists have attempted to provide definitions of marriage, none of them has been satisfactorily and sufficiently general enough to encompass all its various manifestations. This is because marriage is a unique institution of human society that has different implications in different cultures. It is a biological fact that marriage is intimately linked to parenthood. This has led to many anthropologists like Malinowski and Radcliffe-Brown to propose definitions of marriage centering on the Principle of Legitimacy.

Radcliffe-Brown states that Marriage is a social arrangement by which a child is given a legitimate position in the society determined by parent hood in the social sense.

According to Westermarck it is a relation of one or more men to one or more women which is recognized by custom or law and involves certain rights and duties both in the case of parties entering the union and in the case of children born out of this union.

According to Lundberg, marriage consists of rules and regulations that define the rights, duties and privileges of husband and wife with respect to each other.

According to Horton and Hunt marriage is the approved social pattern whereby two or more persons establish a family.

Edmund Leach argued that the institutions commonly classed as marriage are concerned with the allocation of a number of distinguishable classes of rights and hence may serve to do any or some or all of the following.

It is clear from different definitions that it is only through the establishment of culturally controlled and sanctioned marital relations that a family comes into being. The institutionalized form of these relations is called marriage. Marriage and family are two aspects of the same social reality that is recognized by the world. Anderson and Parker say that wedding is the recognition of the significance of marriage to society and to individuals through the public ceremony usually accompanying it. Such a ceremony indicates the society's control.

Anthropological studies of marriage have brought out complex marriage systems .In the Nuer ghost marriage a woman marries a woman. In another form of marriage a widow either remarries or takes lovers. The children born to her are considered as a legitimate offspring of her dead husband. In yet another form of marriage among the Nuer a woman marries another senior woman. Children born to the junior woman because of the links with a lover are considered to be the members of the husband’s patrilineage. In the matrilineal Nair society in Kerala, young girls were married ceremoniously but did not reside with their husbands. The girls were permitted to take lovers with whom they bore children. Neither the husbands nor the lovers had right over the children who became the members of their mother’s lineage.

The norm in Hypergamy is that a man should marry his daughter in a family of higher status than his own. In a hypergamous marriage a woman marries a superior or an equal; a man should not marry a woman of higher status than himself. Though Hypergamy is prevalent in India it is not universal. In classical Hindu ideology the bride is considered as a gift or dan. In addition gifts in terms of dowry and materials are also given. The hierarchical relationship between the wife giver and wife receiver may be expressed in commensal activities. Families by adopting hypergamous marriages may improve their rank. Hypergamous marriages when repeated by wife givers and wife receivers may lead to consolidation of affinal relationship. 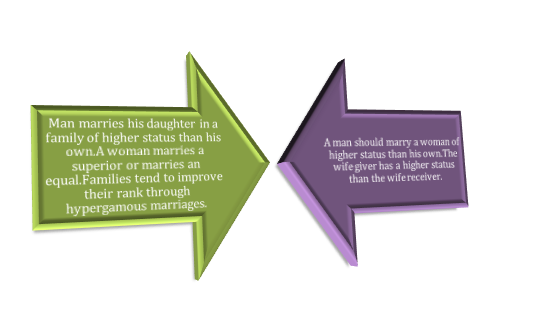 The norm in hypogamous system is that a man should marry a woman of higher status than his own. In such a case the wife giver has a higher status than the wife receiver. Such a type of marriage has been chronicled in Myanmar where commoners married women of aristocratic lineages.