In the Muslim community marriage is universal for it discourages celibacy. Muslims call their marriage Nikah .Marriage is regarded not as a religious sacrament but as a secular bond. The bridegroom makes a proposal to the bride just before the wedding ceremony in the presence of two witnesses and a maulavi or kazi.The proposal is called ijab and its acceptance is called qubul.It is necessary that both the proposal and its acceptance must take place at the same meeting to make it a sahi Nikah.It is a matter of tradition among the Muslims to have marriage among equals. Though there is no legal prohibition to contract marriage with a person of low status, such marriages are looked down upon. The run-away marriages called kifa when the girls run away with boys and marry them on their own choice are not recognized. 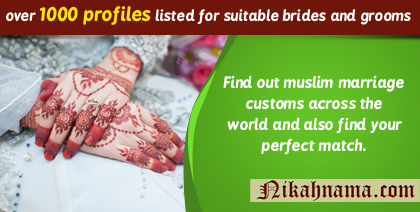 Marrying idolaters and slaves is also not approved. There is also provision of preferential system in mate selection. The parallel cousins and cross cousins are allowed to get married. Marriage that is held contrary to the Islamic rules is called batil or invalid marriage.Meher or dower is a practice associated with Muslim marriage. It is a sum of money or other property which a wife is entitled to get from her husband in consideration of the marriage.Muta is a special type of marriage for pleasure which is for a specified period only.Iddat is the period of seclusion for three menstrual periods for a woman after the death /divorce by her husband to ascertain whether she is pregnant or not. Only after this period she can remarry. Muslim marriage can be dissolved in the following ways: Divorce as per the Muslim law but without the intervention of the court: They are of two types-Kula where divorce is initiated at the instance of the wife and Mubarat where initiative may come either from the wife or from the husband.Talaq represents one of the ways according to which a Muslim husband can give divorce to his wife as per the Muslim law by repeating the dismissal formula thrice. The talaq may be affected either orally by making some pronouncements or in writing by presenting talaqnama.Divorce as recognized by Shariah Act 1937 provides for three forms of divorce:Illa,Zihar and Lian.There is also provision of divorce as per the Dissolution of Muslim Marriage Act 1939.