Home >> Marriage Family and Kinship >> Types of the Family

Types of the Family

Types of Family in Sociology

On the basis of marriage family has been classified into three major types: 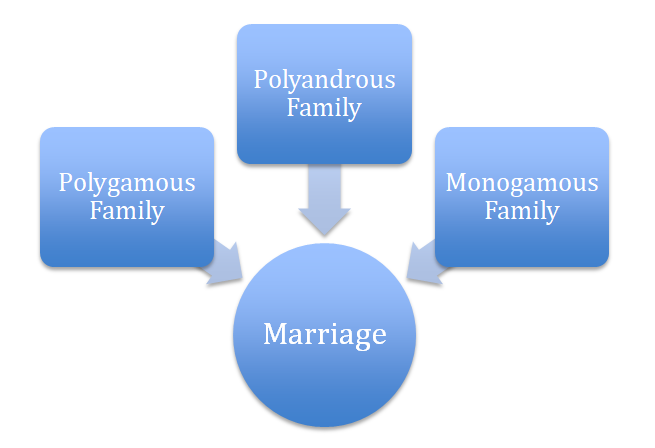 On the basis of nature of the residence family can be classified into three main types: 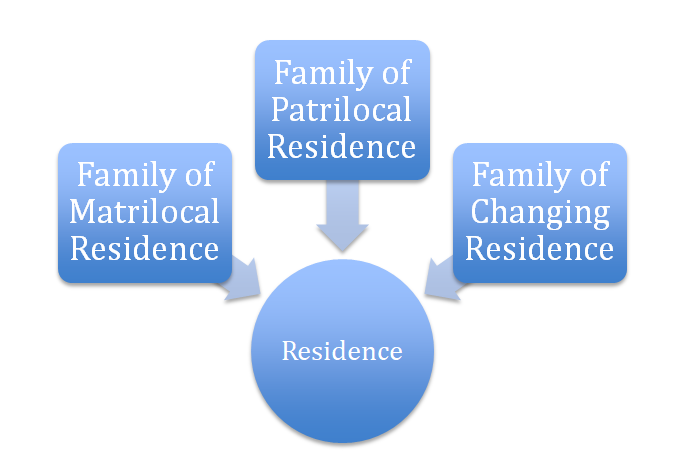 On the basis of ancestry or descent family can be classified into two main types: 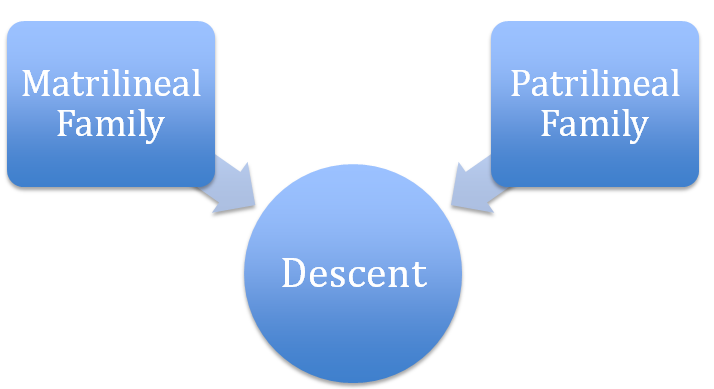 On the basis of the nature of authority family can be classified into two main types: 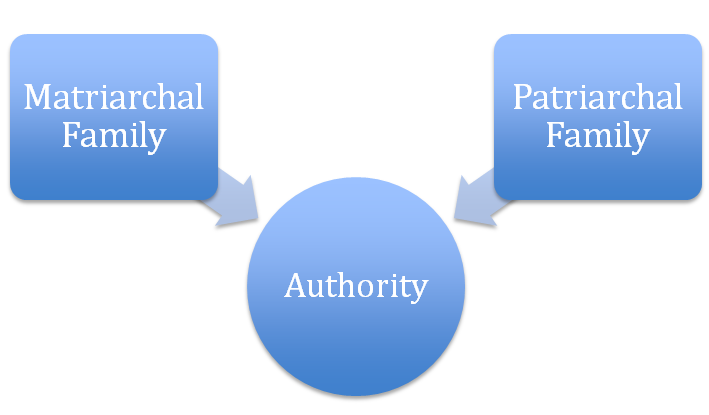 On the basis of size or structure and generations of family can be classified into two main types:

On the basis of nature of relations among the family members, the family can be classified into two main types: 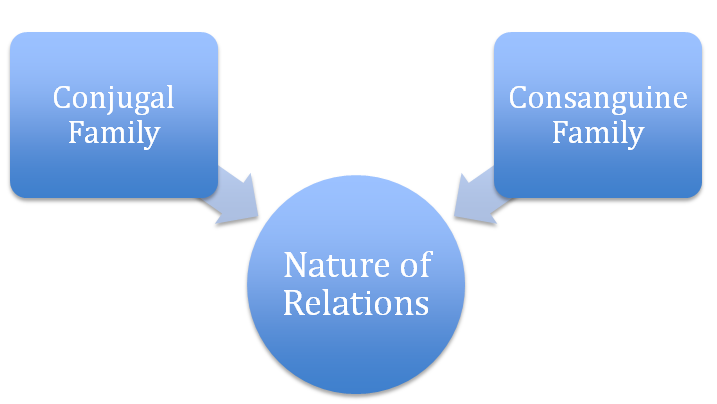 Types of Family in India

The matriarchal family known as mother centered or mother dominated family. The mother or the woman is the head of the family. She exercises authority and manages the property. The descent is traced through the mother hence it is matrilineal in descent. Daughters inherit the property of the mother. The status of the children is decided by the status of the mother. Matriarchal family is matrilocal in residence. After the marriage the wife stays back in her mother's home. The husband pays occasional visits to the wife's home. In theory mother exercises authority and power in the matriarchal family. She is the head of the family and her decisions are final. But in practice some relatives of the family, her brother exercises authority in the family. The maternal family brings together the kinsmen and welds them in a powerful group.

The patriarchal family is also known as father centered or father dominated family. The father is the head of the family and exercises authority. He is the administrator of the family property. The descent, inheritance and succession are recognized through the male line. Patriarchal families are patrilineal in character because the descent is traced through the male line. Only the male children inherit the property. Patriarchal family is patrilocal in residence. Sons continue to live with the father in his own house even after their marriages. Only the wives come and join them. Women have secondary position in these families. Children are brought up in their father's family.

The individual nuclear family is a universal social phenomenon. It can be defined as a small group composed of husband and wife and children that constitute a unit apart from the rest of the community. The nuclear family is a characteristic of all the modern industrial societies in which a high degree of structural and functional specialization exists.The nuclear family comprises a cohabiting man and woman who maintain a socially approved sexual relationship and have at least one child. The traditional nuclear family is a nuclear family in which the wife works in the home without pay while the husband works outside the home for money. This makes him the primary provider and ultimate authority according to Popenoe.

According to Lowie it does not matter whether marital relations are permanent or temporary; whether there is polygyny or polyandry the one fact stands out beyond all others that everywhere the husband, wife and immature children constitute a unit apart from the remainder of the community. T.B.Bottomore states that the universality of the nuclear family can be accounted for by the important functions that it has been performing. The nuclear family has been performing the sexual, the economic, the reproductive and the educational functions. The indispensability of these and few other functions has contributed to its universality. A major factor in maintaining the nuclear family is economic cooperation based upon the division of labor between the sexes. The structure of the nuclear family is not same everywhere. Bottomore makes a distinction between two kinds of family system 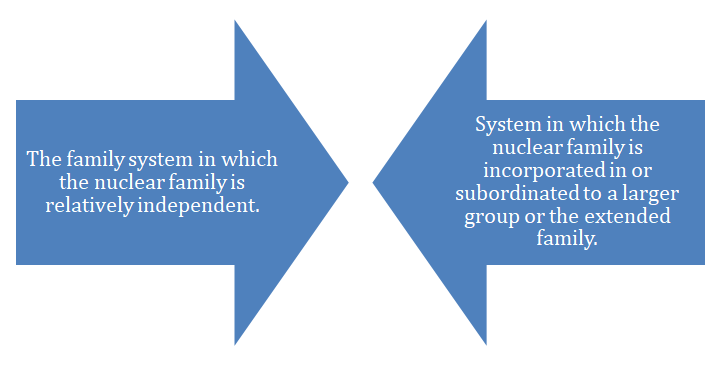 Vogel and Bell have presented a functional explanation based on the intensive study of American families with emotionally disturbed children. Often the tension and hostility of unresolved conflicts between parents are projected onto the child. The child is thus used an emotional scapegoat by the parents to release their tension. It serves as a personality stabilizing process for the parents and keeps the family united but the child pays the cost of such unity.

The joint family is also known as undivided family or extended family. It normally consists of members belong to two-three generations: husband and wife, their married and unmarried children and their married or unmarried grandchildren. The joint family system constituted the basic social institution in many traditional societies particularly Asian societies like Indian. The joint family is considered as bedrock on which Hindu values and attitudes are built. The joint family is a mode of combining smaller families into larger family units through the extension of three or more generations. In joint family the members are related through blood and spread over several generations living together under a common space and work under common head. According to Iravati Karve, the joint family may be defined as a group of people who generally live under one roof, who eat food cooked at one hearth, who hold property in common and who participate in common family worship and are related to each other as some particular type of kindred. There are two forms of joint family: 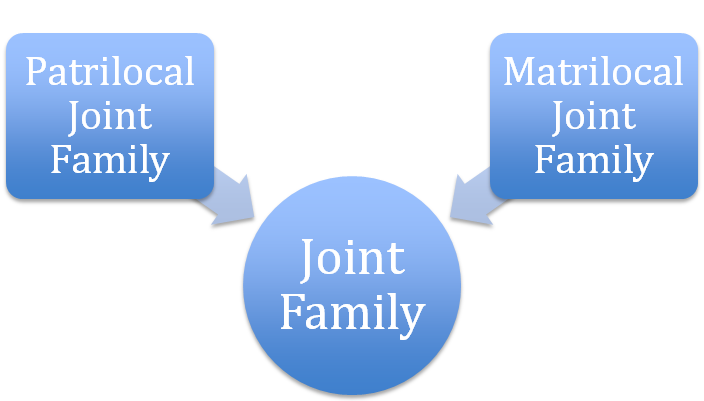